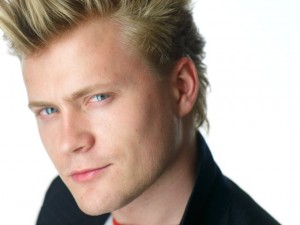 MAX DARWIN (Creator) first appeared on stage before he could walk!  He loves theater, magic, ninjas, and the sound of children laughing.  His stage show, The Amazing Max, has been playing in NYC Off Broadway and touring across the county since 2011.  He can be seen as a featured artist on Season 3 & 4 of “Brain Games” (National Geographic Channel) and magic consultant for “Gotham” (Fox) and “American’s Got Talent” (NBC).

Max was selected as an artist in residence as part of The New Victory Theater’s Labworks program and collaborated with Academy Award Winner Alexander Dinelaris (“Birdman”).

During COVID-19 Max stepped onto a virtual stage to perform perhaps his most incredible feat ever: Getting kids truly excited about learning something and – in the process – showing them how to believe in themselves.  Max is mentoring students all over the U.S. and as far away as Mexico, Finland, Kuwait, and Hong Kong.

– Performed his first illusion at his brother’s Bar Mitzvah
– Dressed like a ninja for Halloween from ages 3 – 10
– Grew up in Washington DC
– His favorite movie is “Charlie and the Chocolate Factory”
– Loves dogs, especially French Bulldogs
– Rode in a horse and buggy for 2 weeks through Tennessee
– His grandfather, Max Goldblatt, ran for mayor in Dallas, TX