The Arts Midwest Conference is a booking and education conference for the Midwest performing arts industry that took place Wednesday, September 5–Saturday, September 8 at the Indiana Convention Center.

Each year the this conference brings together a community of arts professionals who create, present, and tour performances to audiences across the Midwest.

What do I say about Indianapolis…?   First off, as you can see in the picture to the right, Lagurdia airport was teeming with people dying to get there… 😅  No no, people eventually showed up and the flight was almost full and an hour and a half later we were in Indy.  When I walked into the expo hall, my amazing agent and producer Christine Cox from C Squared Entertainment was already in the booth doing business with a presenter!  She’s awesome.

Here’s how a touring conference works for those that don’t know.  Artists, and agents that rep artists, buy booths in the expo hall just like you would at a trade show.  The people walking around that take meetings with those agents and artists are there representing a theatre or theatres from that in some way book touring artists or shows.  These people are called “presenters”.  They’re called that because they present other artist’s work as opposed to creating new work themselves.  (This is how most Performing Arts Centers work.)  And these presenters book every size, shape, and kind of art you can imagine.  They book bands and musicians of every kind, huge symphony orchestras, dance companies, plays and musicals both large and small, famous comedians, not so famous comedians,  Circus shows, and my humble favorite,  the best live family magic show in the country: THE AMAZING MAX! 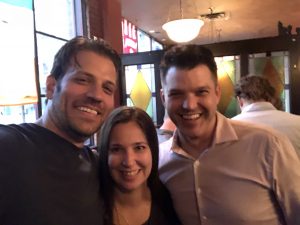 Christine is the one who really does the work at these conferences.  She gets full credit.  I like going because I get to see my awesomely talented friends from the touring industry.  When on tour we artists are like ships passing in the night.  We’re traveling from theatre to theatre and none of us are ever at the same place with each other!  The guys in this pic with Christine are two of my favorite peeps.  On the left is my friend David Wannen of The New York Gilbert & Sullivan Players and on the right is the golden voiced Louisiana baby Clay Johnson of the The Fabulous Equinox Orchestra.  They’re both great people and they both have uhhmazing voices.  You should check them both out. 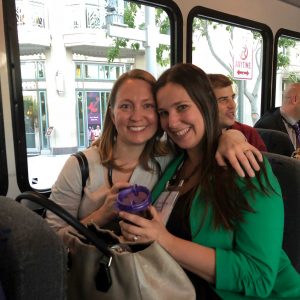 One of our best friends Sarah McCarthy of Dandelion Artists had the booth right next to Christine at C Squared Entertainment.  Sarah reps some of the best kids musicians in the country.  Grammy winners like “The Okie Dokie Brothers” and “Secret Agent 23 Skidoo” seek her out to be their agent.  And for good reason,  SHE’S THE BEST.

We all ended up at a Karaoke bar as we always do on the final night of Arts Midwest.  That was super fun.  At the end of the conference Christine said it might have been the best Arts Midwest YET.  She had talked to presenters from just about every nearby state and a ton of people were enthusiastic about having us at their theatre.  And that my friends was Arts Midwest 2018.  I’m back from Indianapolis and it looks like it’s gonna be a busy year ahead.  AND I LOVE THAT.

Till next time my friends! 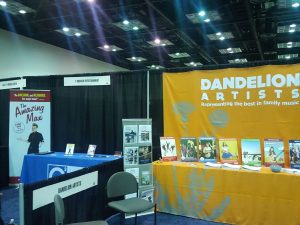