Clearwater’s Great Hudson River Revival (aka “the Clearwater Festival” or “Revival”) features seven sustainably powered stages with diverse music, dance, storytelling and family-oriented programming.  Inspired by Pete Seeger’s desire to clean up the Hudson river over forty years ago, Clearwater’s Great Hudson River Revival initially helped raise the funds to build the sloop Clearwater, which has since become a world-renowned floating classroom and a symbol of effective grassroots action. Today, Hudson River Sloop Clearwater Incorporated is a non-profit organization that stands at the forefront of the nation’s environmental challenges. The revenue raised by the Festival  goes to support Clearwater’s numerous educational programs and its work toward environmental and social justice—as well as keeping the sloop Clearwater afloat. 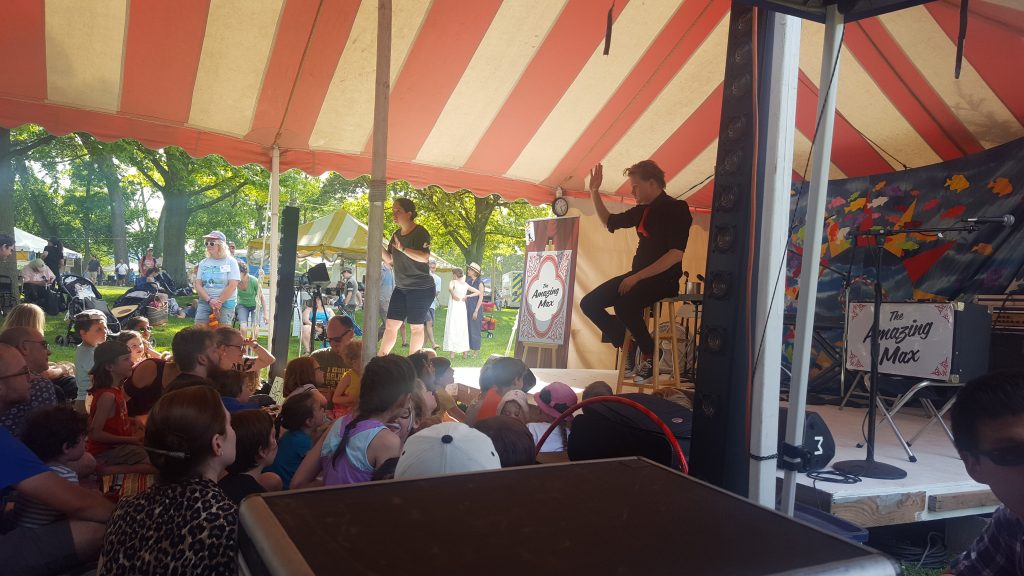 Man did we have a great time performing here.  The weather and music was amazing.  But most of all the  audiences were amazing.  I had an adorable three year old boy who was wearing only his swimsuit help me on stage and his little trunks kept…struggling with gravity.  It was pretty funny.  There was also an ASL interpreter on the side of the stage for anyone hard of hearing.  I thought that was such a wonderful idea by the festival organizers.  Also everywhere you saw a trash can there was a recycling bin next to it and a compost bin next to that.  The festival was as eco friendly as humanly possible.  So cool.  And the booker told me that in the 52 years since the festival was founded I was the first magician ever to be billed on the lineup.  MAKIN HISTORY BABY!  How cool is that! 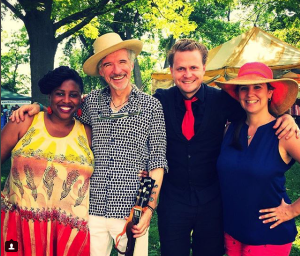 I got to share the stage with my talented friend and Grammy Award Winner Dan Zanes.  Keep a lookout for Dan’s AWESOME SOUNDING new Folk Opera NIGHTRAIN 57  that he and his immensely talented wife Claudia Eliaza wrote, composed, and perform together.  If my instincts are right you’ll be hearing a lot about it in the coming year. 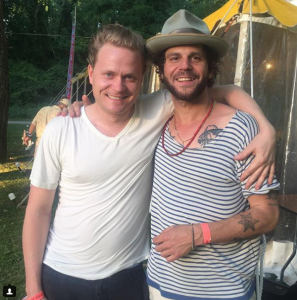 Also really great to see was my buddy Langhorne Slim.  We went to college together, me in the acting conservatory – him in the music conservatory, and the first time we heard him play freshman year we all knew he was going to be huge.  It feels good to be right because he is crushing life right now.  If you aren’t familiar with his music go find him on Spotify or Pandora.  He is the real deal.  Unique and authentic.  And loving.  He’s seemingly on tour nonstop so if you get the chance to see him live then just GO.  Cuz man seeing him perform live on stage with his band is more than just a concert.  He’s amazing with the audience, he’s moving and funny, and the show is different every time which makes it electric. SO MUCH FUN.

Quite often, us touring artists barely miss seeing each other by a day or two.  So when we actually had a few minutes of down time in between our sets, it was really great to catch up.

As I was packing up at the end of the day, and the sun was slowly setting over the crystal Hudson River, and I heard Jeff Tweedy, the lead singer of WILCO, leading a few thousand people in a sing along of his song California Stars.  It stopped me in my tracks. With the sun setting and the breeze blowing it felt, looked, and sounded like magic.

And that, my friends, was Clearwater.