What a great day when fellow magician, Kevin Spencer, asked me if I would help him with a research project!  He had been in residence at The University of Alabama at Birmingham teaching young Occupational Therapists how to use simple magic tricks and a little psychology to engage patients with cerebral palsy in a creative and fun-filled way.

Kevin created a 5 point system that measures the therapists ability to retain the knowledge and perform the tricks in such a way that they don’t reveal the secret and are engaging to the audience.  My role would be rating the students using the point system as they each performed their 3 magic tricks one at a time via video call.

Fun Fact – To prove that the system works and get quantifiable data it takes more than one researcher to rate each student and then have a third person compare both researchers data and create a metric that gauges whether the system works. This is called “Inter-rater Reliability” If only ONE researcher is rating the students then the information is qualitative not quantitative because it is that sole researcher’s personal opinion. If there is more than one “qualified rater”  and we rate them mostly the same way, somewhere around 70-75%, then it means the rating system works well.  If both researchers have very different ratings then the system would need improvement.

As we discussed the program Kevin GIGGLED, you know you giggled Kevin,  and told me about the ONE catch.  In order to be a part of this project I would need to get certified by the National Institute of Health as a certified human researcher.  This meant I needed to take a test, 16 mini tests to be exact!  The National Institute of Health has deemed me,  Max Darwin, a Certified Human Researcher with an IRB-Social-Behavioral-Educational focus.

In October from three different states, we commenced our inter-rater reliability project via teleconference.  Kevin was in Virginia, I was in New York, and the occupational therapy students were in a classroom in Alabama. Part of the rating system is that Kevin and I cannot know each other’s scores until after all the research is done.  That way our data can be compared without it being contaminated by each other’s opinion. 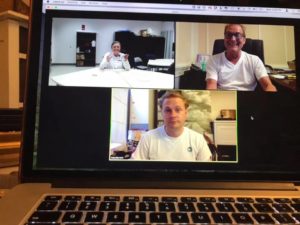 Over the course of three days we viewed around 100 students one at a time for 5 minutes each.  They performed the three magic tricks, adding in a little patter if they wanted to.  After all one of the things we were looking at was their ability to make the trick fun.  (Magic is always supposed to be fun, no matter if you’re watching or performing it yourself!)

And this entire experience was so fun!  The idea that my input could help validate this system that in turn, down the road, could help a huge amount of children with special needs through the use of art and magic?  Fuhgedaboudit.  Kevin I’ll help you any time brother.

So once this research paper is published, and because I’m a certified human researcherby the NATIONAL INSTITUTE OF HEALTH people!,  I’d be more than happy to help any of you with your next human research project.  Email me and we’ll talk about it.