Max goes to Imaginate in Scotland

Have I ever talked about how important it is to always be pushing yourself further than you think is possible?  I try to never get complacent and always push what I think I and my work can do a little further.  That said earlier this month I arrived home from the Edinburgh International Children’s Festival, where EVERYONE seemed to RAISE THE BAR from what many of us would consider “Children’s Theatre”.

The festival celebrates and showcases a VERY diverse selection of shows and new projects that are in development from all over the world.  I saw incredible shows and got to meet other theatre artists from Spain, South Africa, Norway, Holland, Germany, several from Scotland, and the most remote country in the entire world…CANADA. 😂  Actually the some of the best new friends I made at the festival were from Montreal and Quebec!   The festival has established itself as one of the best places for programmers from all over the world to see work of the very highest standard. It is also a place where artists meet, see and discuss work, and take part in professional development activities.  And as if that wasn’t enough, as an non-profit organization they are able brings some of these performances to an audience of around 10,000 Scottish children, teachers, and families each year.  (Max stands and applauds) 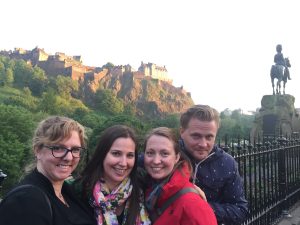 With me on this 10 day adventure were three other American delegates.  *Note – The following nicknames were given by me and are in no way approved by the recipient…  I was joined by “The Superhero” Sarah McCarthy of Dandelion Artists,  Kathleen “The Booking Machine” Toner of KDT Arts Consulting, and my own super agent/producer “The Queen” Christine Cox of C Squared Entertainment.

We saw all types of work that varied in age range, genre, and topic matter.  The Festival did a great job inviting school groups of all ages to each show. So we were not only able to experience the shows ourselves but see how an actual audience of kids reacted to them.    After each show there was a Q&A with students asking the great questions about the work.

One piece that stood out to me was “We Come From Far Far Away” by the Norwegian theatre company New International Encounter.  As opposed to a traditional theatre setting it began by being invited to take off your shoes and enter a YURT!  (A YURT is a traditional mongolian tent.) 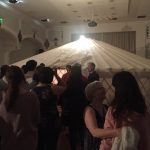 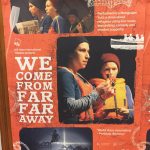 I was surrounded by 50 middle school aged students who like myself were fully engaged with the telling of a very moving story  about two teenage boys who flee Syria and become refugees in hopes of finding a better safer part of the world to live in.  Not only was it deeply moving but the performers and live music made it very entertaining as well.   It was wonderful to see a show for young people that drew attention to a still very important and very REAL topic that is not in the news anymore as much as it should be.  I really hope that they’ll make it to the states with this one.

I find that here in America there’s a certain negative image that often comes to mind when you hear the words “childrens theatre” or “Theatre for Young Audiences”.  An image that what you are about to see is something “less than” an 8pm show for adults.  Over my ten days at the Edinburgh International Children’s Festival I often wondered how American audiences would react to the theatre pieces I was seeing.  And I hoped they would embrace much of it.  Because these people were definitely pushing our art form further.

So now we’re back from Scotland!  And I can say with absolute certainty that me and my co-adventurers are all amped and empowered to dig deeper into our work.  Speaking of which, I have a really exciting announcement to make about my BRAND NEW SHOW.

But that will have to wait till next time….😉